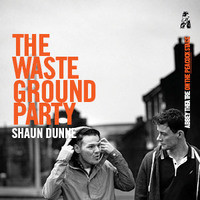 The Waste Ground Party is Shaun Dunne’s first play to be commissioned and produced by the Abbey Theatre.  It premieres on the Peacock stage on Tuesday, 4 November 2014.  Shaun Dunne is part of a new generation of playwrights whose work reflects the concerns of young people’s lives today. In The Waste Ground Party, Shaun gives us his fresh, insightful take on an inner city community struggling to stay connected as they try to better their lives.

Directed by Gerard Stembridge,The Waste Ground Party features a talented ensemble cast.  Appearing in this production are: Lloyd Cooney (seen in The Risen Peopleearlier this year); Louise Lewis (making her Abbey Theatre debut); Alan Mahon (a graduate of The Lir, making his professional stage debut); Jasmine Russell (appeared in The Comedy of Errors), and Ger Ryan (last seen on the Abbey stage in Juno and the Paycock).

In The Waste Ground Party teenager Gary has to decide whether or not to return to college to pursue his education.  In so doing, he risks driving a social divide between himself and his friend Martin and losing the bond he has with his local community.  Martin has his own ambition to be a hero by uniting the kids in a soccer league.  However, his inability to temper his anger and stay motivated proves difficult.  A party to celebrate the transformation of a waste ground into the local playground proves a pivotal point in the lives of these teenagers, revealing truths about themselves and their community.

The Waste Ground Party is a funny, poignant and poetic look at community today.  It explores how the choices we make as a society can either help us to flourish and grow in self-respect within our communities or divide and alienate us from each other.

The Waste Ground Party on the Peacock stage