Sona Jobarteh will headline the Big Bang Festival and will be performing at The Sugar Club on 18th July along with An Tara. 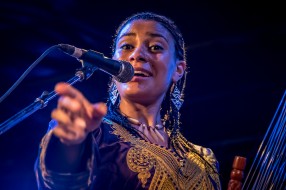 Sona Jobarteh, the Gambian Kora player, will headline this year's Big Bang Festival and will perform with her five-piece band at The Sugar Club on 18th July at 8pm. Sona’s family, which includes her cousin Toumani Diabate, is one of only five griot families who, according to Manding tradition have the exclusive right to play the 21 stringed kora professionally. Support on the night will be provided by An Tara, featuring Matthew Noone (formerly of The Bahh Band, a collaborator with Martin Hayes and Dennis Cahill) on the Indian 25-stringed Sarode, and the legendary Tommy Hayes (Stockton’s Wing, Puck Fair) on bodhran and percussion. Book tickets here!