Sisterland Disco Brunch at The Sussex

Sisterland Disco Brunch at The Sussex 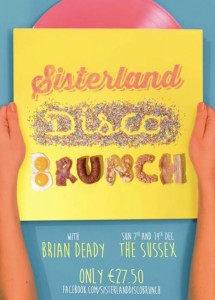 Grab your mates for a scrumptious brunch and all out stomping boogie at the Sisterland Disco Brunch this December. Indulge in a cocktail on arrival, a tasty three-course brunch and then dance to the funky disco sounds of Brian Deady and Steve-O playing live. Known for his innovative blending of styles – west coast funk mixed up with New York disco, doo-wop and early 90s trance – Deady’s sounds will have you grooving on a Sunday afternoon and wishing every weekend could be this funky. Don't believe us, listen up here.

If you can't make it to this disco brunch, don't worry, there is another one next week! Click here for info