Theatre
THE HILARIOUS SELL-OUT HIT OF THE YEAR IS BACK!

RETURNING FOR TWO WEEKS ONLY DUE TO PHENOMENAL DEMAND
Monday February 16 - Saturday February 28, 2015 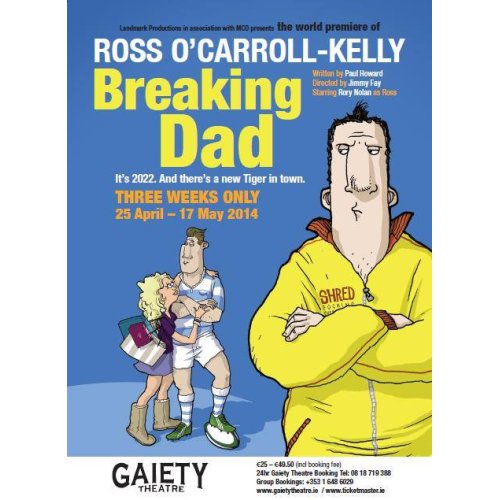 With standing ovations every night and rave reviews, the hilarious sell-out of the year is back! Ross O' Carroll-Kelly's Breaking Dadmakes a highly anticipated returns to The Gaiety Theatre for two weeks from Monday 16th until Saturday 28th February 2015 for more southside antics.

One of Ireland’s greatest actors, Rory Nolan  (DruidMurphy, Citizen Charlie), reprises his role as Ross, the legendary socialite and seducer, who has been described as "Ireland's most eligible married man" and "the greatest Irish player never to actually make it in the game"!

Paul Howard’s character Ross has become the star of a critically acclaimed series of books that satirized Ireland during the years of the boom and have sold close to one million copies in Ireland alone. A remarkable eight Ross O'Carroll-Kelly titles have been shortlisted for Irish Book Awards, so the stage play Breaking Dad is a must-see for all fans!

The year is 2022. Ireland is in the midst of an unexpected economic boom. The country’s debts have been repaid in full, the people are once again selling houses to each other for five times what they’re worth and Bertie Ahern is set to become Taoiseach again at the age of 71.  Ross O’Carroll-Kelly is entering his middle years without a care in the world.  He’s got a son who’s a professional footballer, a career-minded wife who’s about to land the job of her dreams – and, like good Cognac, his looks just keep improving with age. For Ireland’s most eligible married man, life is good. Until his teenage daughter arrives home from Wesley one night with the captain of the Blackrock College rugby team – and Ross is forced to face up to the lesson that you must reap what you have sown.

Breaking Dad is the third Ross O’Carroll-Kelly stage play, following the hugely successful The Last Days of the Celtic Tiger (2007) andBetween Foxrock and a Hard Place(2010).