Rory and The Island-The Academy

Rory and The Island will perform on April 4th in The Academy.

Rory, former front man of Donegal indie/pop/rock trio the Revs, moved to Lanzarote in 2006 following the demise of the band. Since then he has sold in excess of 10, 000 solo albums, notched up over eight top 20 singles and seen some of his songs recorded by artists like Sharon Shannon, Finbar Furey and Wallis Bird. 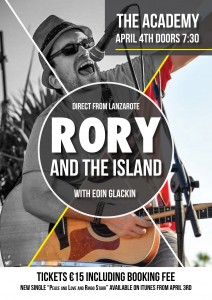 Gallagher has gone from being a minor pop celebrity in Ireland back in 2002 to becoming a cult artist, slowly carving out an amazing career for himself by flying under the radar while building a genuine following at the same time.

Eoin Glackin will be the support act on the night.