Celebrate the Centenary by paying a visit to the must see REVOLUTION 1916 The Original & Authentic Exhibition in the Ambassador Theatre O’Connell St Dublin which opens 27th of February 2016. 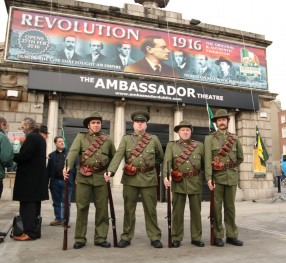 A fitting location for the Revolution 1916 Exhibition, the Ambassador Theatre was formerly the Rotunda Rink and dates back to 1764. It was here on 25 November 1913 that the Irish Volunteers held a mass meeting and many volunteers who took part in the 1916 Rising signed up. During the 1916 Rising, the Ambassador was the backdrop for the famous image of British Soldiers posing with the captured Irish Republic flag held upside down and inside out. Beside the building is where the captured rebels from the G.P.O. and Four Courts garrisons were held out overnight at the front of the Rotunda.