Photography Exhibition – Road To The Rising

Curated by Mark Duncan and Dr Paul Rouse, Century Ireland. An on street photography exhibition showing the social context of the time. 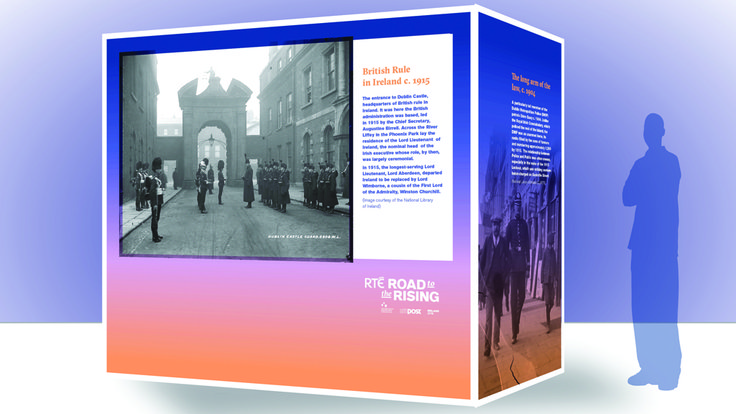 In 1915 Dublin was a city at war - and a city on the edge of rebellion. The strains of war had worsened divides long apparent in the city. Thousands of Dubliners were fighting for the British army in the trenches of Gallipoli, Flanders and the Somme. Every day saw a continuing clamour for more and more recruits to enlist. Recruitment rallies were disrupted by those who wanted revolution in Ireland. For some, this revolution was to be socialist; their passion for change was rooted in the appalling living conditions endured by so many. Others were driven by a nationalist desire to create an independent Irish state and by a determination to seize the initiative while the United Kingdom was consumed with global conflict.

There were other tensions, too. Women sought the right to vote, temperance campaigners fought to curb the abuse of alcohol in a city awash with drink, and Gaelic revivalists attempted to promote Irish culture in the shadow cast by Empire.

In the ferment of its politics, the vibrancy of its culture, the vertical divide of its religions, and the extraordinary disparity in its wealth, Dublin was a city  in the midst of enormous change.

Century Ireland is an online historical newspaper that tells the story of the events of Irish life a century ago. Published fortnightly and freely available, Century Ireland  not only reports on life in Ireland 100 years ago; it supports this reportage with  a wealth of visual, archival and contextual material to facilitate an understanding of the complexities of Irish life throughout a decade of great political and social upheaval. Alongside the big stories of war and revolution, Century Ireland brings the lived experience to the fore by highlighting issues of agriculture and industry; sport and leisure; science and innovation, adventure, travel, and tourism; children and family; poverty and health; and law and order.

So why not keep step with history and follow the Irish experience  week by week, month by month, year by year? Why not track the unfolding of major national and international developments against the backdrop of everyday Irish life?

In 2015 Century Ireland will also launch two special online exhibitions. The first, to be launched on April 23rd 2015, centres on the ‘Irish at Gallipoli’, men of different religions and social backgrounds, who fought and died in one of the most iconic and disastrous military campaigns of the First World War. This exhibition will feature guides, photographs, diaries, archival audio recordings and filmed analysis with experts across a range of disciplines – history, literature and music.

Then, in late 2015, Century Ireland will launch a special online exhibition which will look at the ideas, the people and places that shaped the 1916 Rising.

Funded by the Department of Arts, Heritage & Gaeltacht and based at Boston College-Ireland, Century Ireland is hosted by RTÉ and involves a partnership with all the major national cultural institutions in Ireland. In 2013, Century Ireland won an Eircom Spider award for best Irish Arts, Culture & Heritage website and was shortlisted for a prestigious Prix Europa, one of the biggest international prizes for public service television, radio and online production.