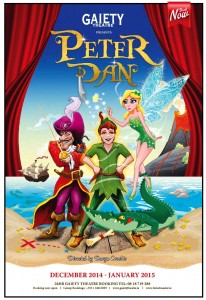 Associated with The Gaiety Theatre almost since the theatre first opened, the licence granted to The Gaiety’s original owners, John and Michael Gunn included permission to stage pantomime which they presented for the first time in December 1873. Both the Theatre Royal and the Queen’s have long since been demolished but The Gaiety and her annual pantomime continue to deliver fun and excitement to new generations. While an outside company used to be responsible for presenting the panto, it has been produced by The Gaiety since 1996.