Major waves will be made in Dublin on Wednesday 17th June 2015 when one of the world’s most spectacular tall ships, The Cuauhtémoc, sails in to Dublin Port. 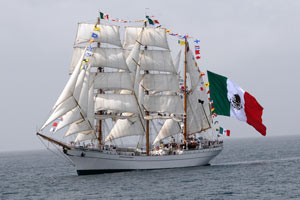 Owned by the Mexican Navy, this magnificent 270ft tall ship will be open to the public to visit for free during her five-day stay in the capital as part of the 40th anniversary celebrations of the establishment of diplomatic relations between Ireland and Mexico. A sail training vessel for the Mexican Navy, The Cuauhtémoc was built in the Celaya shipyards. The last of four windjammers built in Bilbao, Spain, she launched in July 1982. The Cuauhtémoc last visited Dublin in 2012 as part of the Tall Ship Races, when she welcomed over 23,000 visitors on board.

Mooring at Sir John Rogerson’s Quay, Dublin 2, members of the public hoping to get an insight into life on board this magnificent vessel can visit free of charge.