Lianne Las Havas is set to release her new album 'Blood' on 31st July, and will be playing live at the Olympia Theatre on 3rd December! 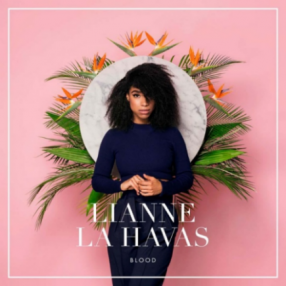 Lianne La Havas made a huge breakthrough with her Top 5 debut album ‘Is Your Love Big Enough?’ which sold 200,000 copies and wonAlbum of the Year at iTunes as well as Barclaycard Mercury Prize andIvor Novello Best Album nominations. Now the 25-year-old London-based singer-songwriter will release her eagerly anticipated new album‘Blood’ on Friday July 31st and will play a headline show in The Olympia theatre on the 3rd of December. Tickets €25 incl. booking fee go on sale this Friday at 9am from ticketmaster.

‘Blood’ is an album that was inspired by Lianne’s family heritage, which is part Jamaican and part Greek. Once touring for her debut album came to a close, she headed to Jamaica with her mother for a holiday which evolved into an experience of self-discovery. Lianne enjoyed emotional reunions with long-lost relatives; embraced Kingston’s clubs; and even jammed in front of her family for the first time during a session with legendary dancehall / reggae producer Stephen McGregor.

Discovering her heritage inspired Lianne to reflect on the connections between now and then, which in turn sparked the songs which would become her future. Simply, “everything seemed to have a lot more clarity, and I really wanted to speak about it.”

Lyrically, the songs that feature on the album are almost all related to“the feeling of who you are and where you come from.” Sonically, ‘Blood’ is a collection that shakes, shimmies and swings with Jamaican grooves with Lianne taking inspiration from the nation’s love of grooves, rhythms and syncopation.

In addition to Stephen McGregor, ‘Blood’ features a rich collection of collaborators. Produced and co-written by Adele / FKA twigscollaborator Paul Epworth, and founded upon an instrumental recording by Ninja Tunes trio The Invisible, the first single ‘Unstoppable’ is a song that Lianne wrote to help to repair a relationship that she had ended.

Set to impact on June 1st, ‘Unstoppable’ will also be available from the evening of April 21st as an instant grat track for those who pre-order the album.

Following his work on Lianne’s debut album, Aqualung’s Matt Halesreturns, most notably on ‘Wonderful’ which he and Lianne co-wrote with Disclosure’s Howard Lawrence. Another highlight comes with the autobiographical album centrepiece ‘Green and Gold’ which was co-produced and co-written by Jamie Lidell, while Alicia Keys andIndia.Arie producer Mark Batson also lent his talents to the album.

Lianne La Havas’s debut ‘Is Your Love Big Enough?’ provided more highlights in its life-cycle than many artists experience in their entire career. It was a journey that encompassed over 120 shows acrossEurope, North America and Japan – including two sold-out Londonshows at the O2 Shepherd’s Bush Empire – with her domestic chart success soon followed by similarly impressive stats the world over. Artists who Lianne had admired soon admired her, to the point where she can call the likes of Prince and Bon Iver friends.

Recent months have seen Lianne contribute a succession of guest appearances. There’s been another recording with Matt Hales on recent Aqualung track ‘Egg Shells’ as well as guest vocals on Alt-J’s ‘Warm Foothills’ and Tourist’s ‘Patterns’. Most notable of all wasLianne’s contribution to Prince’s ‘Art Official Age’ album, which were recorded over the course of a heady weekend at Paisley Park.

Tickets for Lianne La Havas live at The Olympia theatre are priced at €25, buy them here! For more information you can visit the website or Twitter page.