There’s a kaleidoscope of vibrant rhythm waiting for you in Temple Bar on Sunday 19th July, when Meeting House Square will reverberate with joyful noise from Brazil, Ireland, West Africa, The Balkans, Asia, and The US. 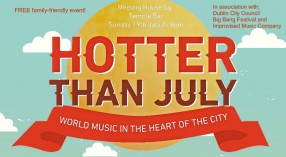 A free event for everybody, Hotter Than July is brought to you by Dublin City Council, who’ve joined forces with Improvised Music Company (IMC) and The Big Bang Festival for a one-day celebration of vivid music in our city today. It begins with some of the oldest music on the planet, the sound of Gamelan from Indonesia, with gongs and shimmering melodies performed by the NCH’s new gamelan orchestra, and ends on a rhythmic high with the massed ranks of brilliant percussion artists gathered here for The Big Bang. In between, there’ll be a whistle stop tour of Dublin’s musical diversity with lots of wonderful musical surprises in store.

If Ireland has become a melting pot, Manden Express might be the band to provide its soundtrack. African, Latin and Irish musicians convene here in service of the good groove, predominantly West Africa, but sociable in its embrace of flamenco, jazz and funk too.
Ensemble Eriu are turning heads on the trad scene, opening up an exhilarating world of possibilities for our old dance forms. Coisceim Dance bring us Striking Moves, an intergenerational dance, drumming and performance project, North Strand Kontra Band bring their own unique take on Balkan dance music to the party, as well as some samba from Morro 16, named after the famous hill in Croker.
Tig Linn are a 7-piece Irish-Nigerian band perform in Yoruba and English, drawing from Irish and Nigerian traditions with a contemporary twist, and you’ll also get some old-time bluegrass from bona fide banjo master Bill Whelan & the Hat Trick String Band.