What must it have been like in Dublin during Word War I? Go along to the National Library of Ireland on Tuesday 25 November for a History Ireland Hedge School debate on Dublin at war 1914-18 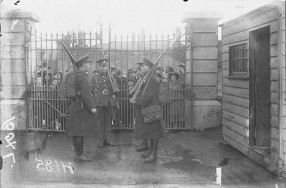 The Great War was the world’s first ‘total war’, where entire populations were mobilized for the war effort. Dublin was no exception. What were levels of recruitment? Where did Dubliners fight? How many died? How did the war affect the local economy? Within 18 months Dublin would be at war in a different sense, scene of the Easter Rising of 1916. What was the Rising’s relationship to the wider conflict?

To answer these and other related questions join History Ireland editor, Tommy Graham, for a lively discussion with David Fitzpatrick (Terror in Ireland: 1916-1923), Brian Hanley (A Documentary History of the IRA, 1916-2005), Ann Matthews (The Irish Citizen Army) and Padraig Yeates (A City in Wartime: Dublin 1914-18).

Join the panel of historians for a lively, unfettered debate. The History Ireland Hedge School is free and open to all. Members of the audience take part in the debate, providing valuable insights and information.

Early arrival is advisable to secure a seat. (For those who cannot attend, a recording will be available on the History Ireland website shortly afterwards).