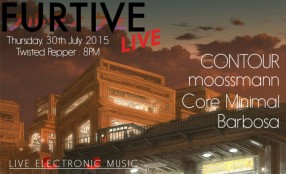 The Furtive: LIVE series hopes to infuse the power of live performance with the energy of original electronic music. All music performed on the night is 100% written and composed by the artists performing. The show will feature live vocals, live synthesis, percussion, piano and a fully-fledged analogue techno performance. The line-up includes FOUR talented Irish acts; Contour, who have just come back from a performance at Longitude festival, moossmann, who has performed at Hard Working Class Heroes and The Beatyard festivals, Core Minimal, who is a household name on the Dublin underground/afterparty scene and Barbosa, studio ninja and Carlow electronic scene heavyweight. Doors open at 8pm and tickets are €10 at the door.