Fly Me To The Moon

From the Olivier Award winning author of Stones in his Pockets comes a comedy written and directed by Marie Jones. 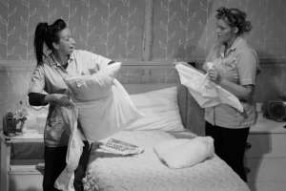 After the universal acclaim for Stones in his Pockets comes another hilarious Marie Jones comedy, featuring Tara Lynne O Neil and Katie Tumelty. Francis and Loretta are community care visitors. Davy, one of their elderly charges, has had a significant win on the horses, but he doesn’t know. When the cash-strapped women learn that Davey will not be around for a considerable time they are faced with a mouth-watering dilemma. Marie Jones is the author of some of the most successful plays ever produced on the island of Ireland. This play investigates whether we are valued more in life or in death.