Brooks Cinema Club offers the unique opportunity to see great movies in an intimate and luxurious surrounding. Our cinema seats 26 people and is the perfect setting to enjoy a great movie!

First rule of Brooks Private Cinema Club, tell everyone! Fight Club tells the story of an insomniac office worker looking for a way to change his life crosses paths with a devil-may-care soap maker and they form an underground fight club that evolves into something much, much more...

For more information on the Brooks Cinema Club, click here.

"The first rule of Fight Club is: you do not talk about Fight Club" 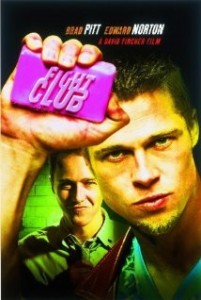 A ticking-time-bomb insomniac and a slippery soap salesman channel primal male aggression into a shocking new form of therapy. Their concept catches on, with underground "fight clubs" forming in every town, until a sensuous eccentric gets in the way and ignites an out-of control spiral toward oblivion.