Join us for a celebration of all things country and fun filled for shows on Friday July 25th & Saturday July 26th at The Academy.  And most importantly, it’s for charity. In the light of all the Garth Brooks disappointment, we’d like to turn the negative into the positive by promising a great evening of entertainment  with a focus on a charity who do great things for the homeless situation in our country – Focus Ireland...

Featuring renowned local star Adrian O’Reilly as Garth Brooks, this pulsating live show highlights all the classics; ‘If Tomorrow Never Comes’, ‘Friends In Low Places, ‘Baton Rouge’, ‘Shameless’, ‘The River’, and ‘The Dance’, to name a few... Coupled with full venue production and a stunning stage and light show, the performance delivers a spectacle extraordinaire for all in attendance.

Each night, following on from  the live band and taking you through to the wee small hours is superstar DJ (to his Mammy) Big Dave and his Country & 80’s & 90’s Disco Roadshow. The roadshow does what it says on the tin! All the big country music artists and all their hits with a mix of 80’s & 90’s nostalgia, guaranteed to set the dancefloor on fire!

In addition to the great music, there’s an abundance of activity and bits and pieces, including great food and drink deals – Make sure to grab some food  at the sizzling summer BBQ before working it off on the Bucking Bronco in the Rodeo Saloon. What more to say? Get your cowboy and cowgirl on!

Tickets €22.90 including booking fee from Ticketmaster nationwide. Phone & internet bookings subject to 12.5% Service charge per ticket / agents €2.15 per ticket. Tickets will also be available at the venue on the night of each event from 9pm.  Note: Admission to Big Dave’s Country & 80’s & 90’s Disco Roadshow is included in ticket price or €10 after 12am. 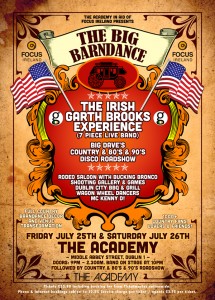