Dublin Blues Cartel formed a year and half ago, after a long association. They began playing every Monday in the Leeson Lounge, playing mostly a version of New Orleans R’n’B with a classic rock twist, sandwiched with swing, Rock’n’Roll, Soul, Funk, Blues and rap of all eras. Their sets consists of radical reworkings of well known R’n’B standards which segue into lengthy improvisations that are one minute, blues jazz crescendo, the next a funk dervish, one minute a pyschedelic freak out, next a country boogie twist, the next a dark ascension of Wagnerian majesty.

Mick Pyro is a member of Republic of Loose who have had three top ten albums in Ireland, one reaching number 2. Mick has supported U.2., The Roots, Ian Brown, The Neville Brothers, Guns n Roses, Snow Patrol and the New York Dolls. He has Co- produced a track for Sinead O, Connor and has appeared with her on stage several times. He has recorded with Camp Lo, Styles P (I like Music) and U.2. (Tribute to Ronnie Drew) 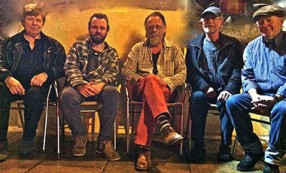