Adapted for the stage by Frank McMahon

For the first time in 25 years, Brendan Behan’s BORSTAL BOY returns to Dublin’s Gaiety Theatre from 11 September for a strictly limited engagement. The critically acclaimed and commemorative play marks the 50th anniversary of the death of Brendan Behan (20th March 1964) and tells the story of the legendary Irish author.

Starring Peter Coonan (Love/Hate, What Richard Did, Quirke) and Gary Lydon (Calvary, The Guard, War House) as the young and older Brendan Behan.

Tickets from €24.50 including booking fee go on sale now from Ticketmaster outlets and The Gaiety Theatre box office.

The production of Borstal Boy was adapted for the stage by Frank McMahon, directed by Conall Morrison, produced by Donal Shiels with executive producer The Gaiety Theatre.

Dublin born Peter Coonan is best known for his role as Frano in RTÉ’s acclaimed drama series Love/Hate, for which he won an IFTA nomination for Best Supporting Actor in a TV Drama (2014). His most recent credits include a lead role in Brendan Grant’s forthcoming feature Get Up And Go, and series 4 of Love/Hate. His film and TV credits also include Lenny Abrahamson’s What Richard Did and the BBC miniseries Quirke.

Gary Lydon was born in London but later moved to his father's hometown of Wexford. He went on to make his London debut in 1988 playing Jimmy Brady in A Handful of Stars (1993) (TV), and went on to perform in Billy Roche's Wexford Trilogy on stage and television. His film credits include Calvary, War Horse, The Last September, Ordinary Decent Criminal and television credits include RTE’s The Clinic and Pure Mule.

Director Conall Morrison is from Armagh and is one of Ireland’s leading theatre directors. He is well known for his work with The Abbey Theatre, The Lyric Belfast, National Theatre UK and numerous independent theatres and companies in Ireland and the UK. He has also written three plays.
Brendan Behan was an Irish playwright and novelist, as well as a youthful revolutionary. In 1939, at age 16, he was arrested in Liverpool with a suitcase full of explosives. Borstal Boy is the autobiographical record of Behan's experiences from that day through to his imprisonment, trial, remand to reform school and final release. Schools for delinquents in England were called Borstal Institutions, and Behan's account of his years as a "Borstal Boy" is told in vigorous and dramatic prose. It tells the vivid memoir of his time in Hollesley Bay Borstal, Sulfolk, England. His daughter, Blanaid Walker recently, said ‘In a way he was lucky to end up in a borstal…. The governor was like a principal and encouraged the boys to rise up out of poverty that many had been born into.’ 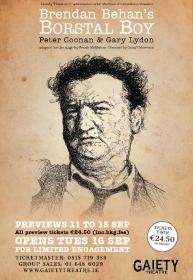