Following their spectacular comeback shows at the Olympia last May, Aslan have just announced a new date at the iconic Dublin venue on Saturday the 20th of September.

Under 14's must be accompanied by an adult, Over 18's ID required to gain access to the bars where alcohol is served.

2014 is the year of Aslan. The two sold out Olympia shows this past May were a landmark for the band, re-establishing their rightful place at the pinnacle of Dublin and Ireland’s live music scene. 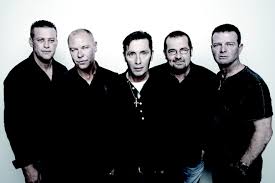 The public outpouring of support was a terrific reminder of why the public holds this group with such affection.

After an uncertain hiatus from performing live dates, Christy Dignam’s illness, while still debilitating, is now not severe enough to stop him from playing the very occasional concert.

This is not to say that Aslan will be able to tour as in the past, but future live dates are now a possibility. Aslan is moving forward, one step at a time.

The boyz are back…