Originally named after the oldest surviving Irish manuscript Psalter, The Cathach, this family run bookshop became Ulysses Rare Books on Bloomsday 2013.  It specialises in rare, collectable and antiquarian books from Ireland’s historical and literary past including works by Oscar Wilde, James Joyce, W.B. Yeats and Samuel Beckett. Browse beneath the caricatures of famous writers which line the walls or head downstairs to marvel at their extensive map collection.

“Stepping into (Ulysses Rare Books), an antiquarian bookshop in Dublin, where a friend on a recent trip through the city directed me, gives you a privileged literary perspective. Walking past shelves upon shelves of first editions, which eventually became seminal works, by authors such as W. B. Yeats, Flann O’Brien, James Joyce, Oscar Wilde, and Samuel Beckett, to name a few, is absolutely spellbinding. (Ulysses Rare Books) specializes in Irish literature, history, and maps, but the collection is not limited to great writers of yore; there are many contemporary works (also first editions) by authors such as Seamus Heaney and Roddy Doyle. It’s a family-run business, and atop the bookshelves is a charming mural running along the perimeter of the shop depicting writers and famous Dublin locales, including McDaids, a famous writers’ haunt and the setting for the opening of James Joyce’s story ‘Grace.’”

From the New Yorker, February 2010 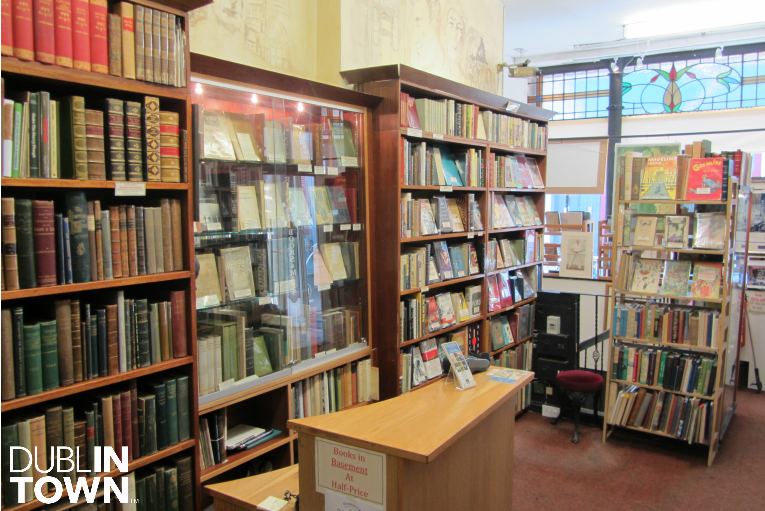 My Perfect Day in Dublin